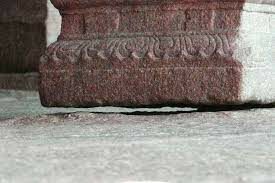 What would you say if I told you that a 15 feet tall, 6 centuries old, monolithic stone pillar has been miraculously hanging from the roof of a 16th-century temple and is still one of the most underrated structures in the country?

It is true. And rightfully so, because in a country like ours where every state, every district and every village has its own history, its own architectural style and its own culture to feel proud of, a few often tend to get taken for granted. Nevertheless, the magnificence of these places and the brilliance of their history remain unfaltered. And more often than not, these beautiful places and their mind-blowing stories, find a way to resurface.

The Veerabhadhra temple situated in the historical village, Lepakshi, (Andhra Pradesh, India) is one such place.

At about 120 km from India’s silicon city-Bengaluru, this temple is known for its majestic structure adorned with carvings and paintings in the popular and mesmerizingly beautiful Vijayanagar style. For National Heritage site lovers, this place makes a perfect weekend getaway.

What to look for in Lepakshi:

At the front of the temple is a large monolithic Nandi (bull), the mount of Shiva, which is known to be the largest of its kind in the world. There is also a large sculpture of a seven hooded snake positioned to protect the Shiva Linga. These two sculptures are the popular attractions of this place.

The temple features many exquisite sculptures of Gods, Goddesses, dancers, artists and musicians, depicting famous episodes of ancient Indian epics like the Mahabharata, the Ramayana, and the Puranas. This includes 24 feet by 14 feet detailed fresco of Veerabhadra, the fiery God created by Lord Shiva, on the ceiling, which is the largest fresco of any single figure in India.

What drew my attention the most, during my visit to this place, were the 70 odd stone pillars around the temple premises, each one uniquely carved to narrate a story of its own. It is believed that this structure outside the temple was a functioning dance hall for dancers and musicians to showcase their talent.

Among these 70 pillars, one is different, special. It is this stone wonder also known as Aakasa Sthamba, that is slowly drawing tourist attention to Lepakshi.

On the outside, this particular pillar is no different from the others. But on closer inspection, one can see that the base of the pillar barely touches the ground. It is said that until a century ago, it was possible to easily pass a thin sheet of paper or a piece of cloth under the pillar.

Sometime around 1910, the pillar was slightly dislodged from its original position when a British engineer, Hamilton tried to move it in an unsuccessful attempt to “rectify” this architectural aberration. It is because of this incident that one edge of the pillar’s square base now touches the ground, while the other three remain afloat.

According to historians, it is this pillar that is acting like ballast to the entire structure, holding the roof in correct alignment and any further shift in its position could ruin the entire architecture.

So, what is it that keeps such a heavy stone pillar a float? Magnetic levitation? Anti-gravity?

Were the ancients proficient in technologies that we are still experimenting with?

It is hard to say.

Keeping the mystery veiled for centuries to come…

An interesting and somewhat convincing explanation to this mysteriously hanging pillar is that the pillar might have been built in a similar manner as the other 69,  but in a way that after a few years, the material used would begin to settle down and cause the joints to slightly shrink from its original size. Since the pillar is rigidly fixed to the ceiling it is forced to remain connected to the roof while rising from the floor. The other pillars would have been placed such that they would gradually pick the additional load of the roof. An architectural brilliance in itself.

Goa – Beyond fish, booze and beaches